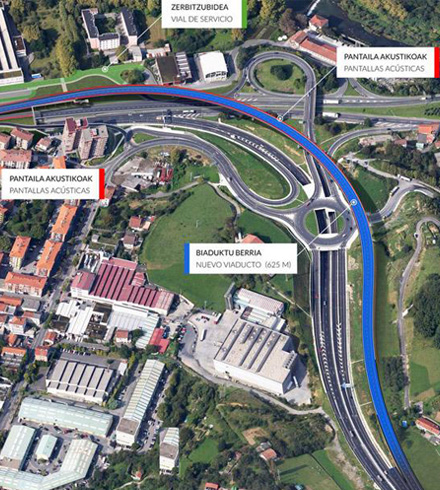 New double-lane viaduct interchange between the A-15 and the N-I in Andoain, which will speed up and make the Bazkardo junction safer.

The DAIR Engineering & Consulting team has supported BIDEGI GIPUZKOAKO AZPIEGITUREN AGENTZIA / AGENCIA GUIPUZCOANA DE INFRAESTRUCTURAS S.A. and Gipuzkoako Foru Aldundia – Provincial Council of Gipuzkoa in the development of the study of alternatives and layout design of this strategic solution for the road network of Gipuzkoa.
The selected solution will consist of a 625 m long viaduct that will connect both roads in a more direct way by means of a much less pronounced and safer curve than the current structure.
At the same height as the end of the viaduct but in the opposite direction, next to the Mimendi neighborhood, the roadway in the Donostia direction will be covered with a canopy to reduce the impact of traffic noise on the residents of that neighborhood. It will be the first structure of its kind in Gipuzkoa, following the examples of large cities such as Madrid or Bilbao.